Biz2X is Offering Lenders Two Options for Responding to the New Round of PPP.   Learn More > 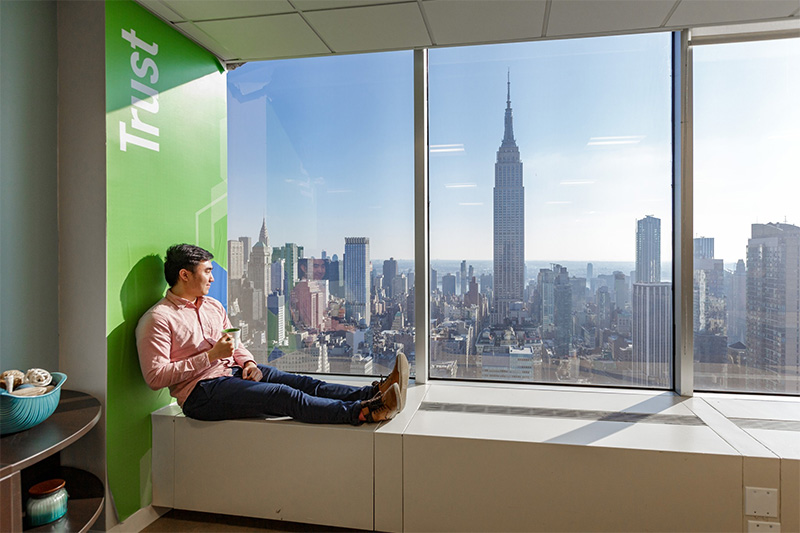 A small New York financial technology firm is poised to change the way financial institutions lend money to businesses, forever. This game-changing tech company has big ideas that are transforming the very essence of business lending.

The COVID-19 pandemic has exposed a number of weaknesses and inefficiencies inherent to the traditional model of business lending. Traditionally, in times of crisis, lending standards have tightened to extreme degrees as risk aversion prompts lenders to issue loans to only to the most creditworthy borrowers. Historically, at a macro-economic level, tighter lending standards cause a drag in the overall economy and contribute to recessionary pressures. This often puts the highest burden on the largest and most important segment of Gross Domestic Product (GDP) – small business owners.

In the past decade, financial technology (FinTech) companies such as Biz2Credit have begun to chip-away at the legacy process of business lending. By using technology to compile credit profile data and make risk assessments in real time, FinTechs have proven to be innovative to expand the lending eco-system. But not all are created equal; especially during times of economic stress.

The current total addressable market (TAM) for business lending was approximately $614 Billion in 2016 according to the US Small Business Administration. One company says it can take that TAM to $1.36 Trillion, or nearly double its current size, in a few short years. Many banking insiders have speculated that it would take an enormous balance sheet to disrupt this marketplace in the conventional sense and there are a few global financial institutions that may come to mind. If you’re thinking about one of the global banking giants, though, think again.

Changing the World of Business Lending from the Inside, Out

Biz2Credit and its SaaS digital lending platform, Biz2X, are poised to emerge as a disruptive force in the business and commercial lending markets. Biz2Credit has been hot on the heels of global banking giants for over a decade now and has emerged as a contender in any serious conversation about fintech lending. But it’s the year-old, Biz2X Platform, armed with its open architecture APIs and advanced risk technology, that is really transforming the once sleepy business lending sector.

Biz2X equips lenders with a digital toolkit to handle every step in the loan lifecycle – from origination to closing to servicing, and even collections. Automation and configurable rules are built right into the platform to speed up loan decisioning. In the process, the software saves bankers up to 83% of the time needed to handle a typical business loan application.

The recent Coronavirus (COVID-19) pandemic has torn the cover off inefficiencies that exist in the business lending markets. In reality, the inefficiencies have always been present, they were just exposed in dramatic fashion during the current global health crisis. As credit rules, compliance mandates and qualification thresholds have changed rapidly during the pandemic, many traditional lenders were not prepared to adapt in real time. Their processes and technology were built around a set of longstanding assumptions that just didn’t work any longer, for instance a heavy reliance on in-branch customer interactions and paper applications. In the time of social distancing, these aren’t the useful assets they once were.

The Biz2X Platform solves a problem in business lending that has been around for a long time. Business banking has been consolidating on a global basis for decades. There has been particular pressure on regional banks and credit unions as the competition for deposits and service fees has accelerated. Fintechs in their own right have also become the fastest-growing segment to compete for traditional banking customers.

With fierce competition dominating the sector, business banking leaders have been searching fora competitive advantage in a mature market. Many are finding that a solution like Biz2X seems to be the key.

Business lending platforms such as Biz2X have now been adopted by several major financial institutions and the outcomes have created a stir in the industry. Biz2X in particular can already boast having Fortune 500 financial clients, as well as regional banks, and lenders on three different continents. From end-to-end, the Biz2X Platform has transformational power. From the customer user experience (UX) and application processing (origination) to data collection and analysis, Biz2X streamlines client on-boarding digitally.

Next, the Biz2X programable rules engines powers the underwriting and decision processing in only a fraction of the time it takes traditional lending processes. This half of the process is conducted using a real-time data access module that checks client inputs against proprietary credit and capital verification sources such as: credit bureaus, bank accounts, know your customer data and payroll data providers. All of these rules and data sources are selected by bankers to fit their needs and can be plugged into the platform through software integrations that come standard.

On the back-end, the loan servicing module runs in real-time as an early warning system to detect anomalies in borrower behavior and warn of potential default signals. This feature interfaces with the collections function to head off loan delinquency and mitigate defaults even before they occur.

The outcomes observed in the Biz2X SaaS offering have now been recognized as a fully market-ready production system and are being rapidly adopted within the banking and financial services markets.

The Roots of This Fintech Revolution Go Back Over Twelve Years

Biz2X’s parent company, Biz2Credit cut its teeth catering to small and medium-sized businesses who were shut out of conventional borrowing markets beginning in 2008 when credit markets dried-up during the financial crisis. Since 2008 Biz2Credit has amassed an impressive portfolio of business clients, boasting over $3 billion in loan originations, acquiring over 7,000 customers a month and earning a place among Deloitte’s Fast 500 in North America for three years running.

Biz2Credit has its origins as a direct to small business Fintech company. Co-founders Rohit Arora and his brother Ramit Arora recognized that creditworthiness was still in abundance during systemic financial crises.

During the Great Recession of 2008 business credit liquidity dried-up as banks and other financial institutions severely tightened credit standards and simply issued fewer business loans. Despite hundreds of billions of dollars in government stimulus designed to expand business credit, banks and other large institutions choose instead to park stimulus reserves in US government treasury securities instead of lending to businesses, as intended by the US Treasury Department, ensuring a 10-25 basis-point return. It was a safe bet in turbulent times.

During the crisis of 2008, banks did not have the ability to properly assess default risk efficiently in a rapidly-changing economic climate and so the best apparent alternative was to hoard cash, despite unprecedented demand for loans from business customers.

“It was very clear that there were many businesses that were credit-worthy during the 2008 crisis but they had little or no access to business loans from banks”, says Rohit Arora.

“The problem of not being able to recognize true business credit-worthiness from a traditional banking perspective has been around for as long as business lending itself, financial crises just make it more obvious”, added Ramit Arora who oversees the Biz2Credit underwriting functions.

Anyone who has applied for a business loan will attest that it is a grueling and time-consuming task. What’s more, the decision horizon for approval can take weeks or even months for an SBA loan.

Fintechs like Biz2Credit have transformed the friction of origination and application processes and turned it into an advantage. The outcome is a significantly enhanced capability to originate more loans to more customers and lower risk and default rates.

Bringing Software as a Service (SaaS) into Traditional Business Lending

What Biz2Credit achieved is a game-changing business process transformation. While scooping-up the industry’s “forgotten, credit-challenged” business customers, Biz2Credit has managed to achieve an envious risk mitigation profile. The lending portfolio originated on the Biz2Credit platform boasts an industry-low write-off rate of approximately 3%. With such a broad portfolio of clients over 12 years, bankers are taking notice of this performance. That write-off rate is multiples lower than even the most conservative Fintech lenders’ performance, especially in the current environment.

Now the company is making that same intelligence and process efficiency available to banks and traditional lenders through Biz2X.

As our technical capabilities matured, we realized we could offer our Fintech advantage in business lending to traditional financial institutions,” says Rohit Arora. “We now have a team of 350 employees around the world, including 250 engineers and data scientists all hard at work to bring Biz2X to the lenders who need it,” he added.

After partnering with companies such as Paychex (NASDAQ: PAYX) and HSBC (NYSE: HSBC) for re-processing their non-qualifying borrowing customers, Biz2Credit has proven it can use technology to turn businesses that would ordinarily have been shut out of the lending market into a valuable client base. Meanwhile continuing to process loan applications in a conventional manner may exclude up to half of the viable business borrowing marketplace.

When you consider that Biz2X can enable virtually any bank to capture this untapped market and reduce write-off rates by up to 65%, that’s the definition of a game-changer.

To learn more about Biz2X, visit their site to schedule a call.

Interested in technology that will make PPP Loan Forgiveness easier for your institution? Talk to us about Biz2X Accelerate SBA. Sign up for a Demo.